Today we spent a bit of time beginning to gut the interior of the Gem. First thing to go... the carpeting someone had installed. Now I can see what the original tile looked like: 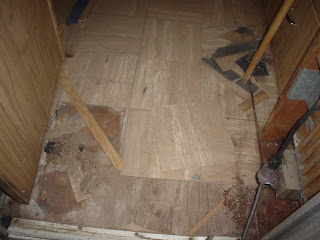 We also began the chore of removing the bench seats, removing the cupboards, furnace and stove. Here you can see the damage to the wood in the front behind the stove: 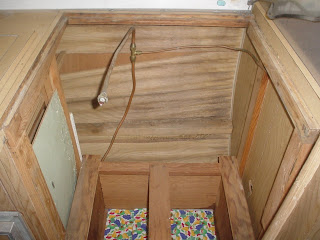 The next photo reveals where much of the major damage began, in the front of the trailer. A tree had apparently landed on the top front corner and was never fixed. Water damage started at this area and rotted much of that side of the trailer. 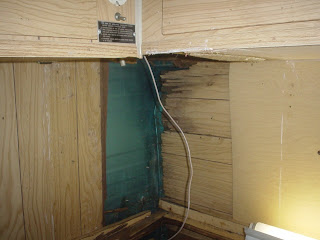 We have found some good, bad and the ugly.
The bad and ugly: Underneath a large, ugly, homebuilt cupboard that someone had added, was a huge hole in the countertop. I was hoping for straight countertop and will now have to replace much of it. The original water tank is also missing... but I guess that is ok since we would have replaced the old metal one with a newer plastic model. The plumbing is also gone.
The Good: We did finally find a "stud" and will be going with 3/4" rigid insulation. We also believe the floor might be in quite good shape after all, or at least most of it.
Once we've got it gutted, we plan to remove the cabin from the chassis and slide the chassis out. The foundation is where we will begin our rebuild.
Posted by B at 2:50 PM